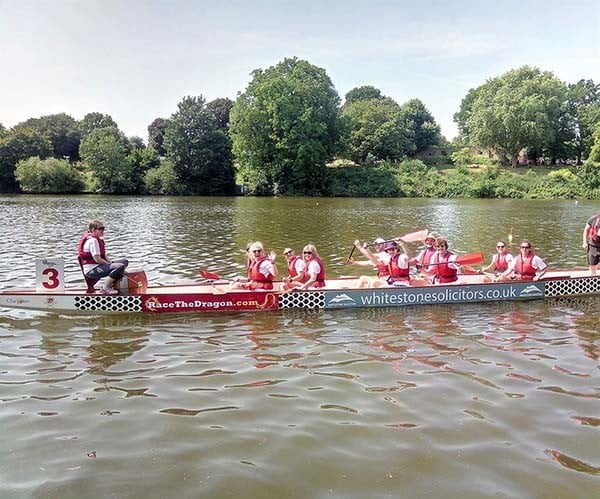 ESO Student Practitioner Baye Drury talks about her experience of rowing in the UK and competing at world class level.

“I began rowing the day I got off the plane having just arrived in the UK from Canada. I had always wanted to row but it was never feasible where I lived previously. When I knew I was moving to the UK, I thought “when in England, row!”. I had looked up Maidstone Invicta Rowing Club before arriving in the UK, and went straight down to the club to join, and began training that week.

I began with the development squad, and raced my first competition a few months later. My first summer in the UK (after Year 1), I won my first Regatta in a double sculls with another girl from the Competitive Squad, and we’ve been competing together for the past 2 years. Together we have won 4 silvers at British Masters Championships, and 1st Places at Hammersmith Regatta (London), Peterborough Regatta, Cambridge Regatta, Maidstone Head, Star Head (Bedford).  With this boat, I sit Stroke, which means I set the rhythm for the whole crew. In 2017, I also competed in Women’s Head of the River Race, which is the largest all women’s rowing race in the world. It was an incredibly inspiring experience! I have also competed in single sculls, just in the twice annual races we host here in Maidstone, winning both, and once won for being the fastest woman on the river (out racing all the larger crews, woohoo!)

Last year, my teammate and I went to Henley Women’s Regatta, a world class all women’s rowing event, but did not make it past qualifiers. We have since trained hard and went back to try our luck again this year – we qualified in the time trials, making us one of the fastest 16 of 36 crews from all over the world. We raced in 8th-finals the same day against one of the top seeded crews in the competition; we lost but we were very happy with how we made them fight for their win. Now we have another 365 days to get even stronger, better, and faster for next year’s race.

I have been the Ladies Captain at the club for almost 2 years now, making me responsible for organizing training on and off the water, and organizing which races we will go. We train on the water all together early every Saturday and Sunday morning for a few years, all year round, in the River Medway right in town. When the days get longer, we will train after work during the week whenever we can. We also do off water training as often as possible- I run 12K about twice weekly and do crossfit about thrice weekly.

Rowing is known for being bad for the back, particularly during sweep rowing which is very one-sided. From my previous alpine ski racing career, I have always had low back problems, but rowing doesn’t seem to aggravate it too much (thankfully!). Studying Osteopathy has made me very aware of the mechanics of my body and has allowed me to figure out how I can use it without hurting myself. Although, general low back treatment at the clinic never goes unwanted! But strong core is essential, as this helps to stabilize a rower’s back when they transfer the force from their legs up to the arms and through to throat in the water. A weak core will cause all force to dissipate in the back; so not only will that make the boat go slower, it will also be very painful for the back! Technique always helps as well, the stroke is suppose to be 80% legs, then 20% combined back and arm strength. Poor technique will put a significantly greater force through the shoulders and back than normal. My teammate has shoulder problems because of bad habits she’s been trying to break for years. I often use kinesio tape on her shoulder before competitions, and she sometimes goes for Osteopathy or sports massage treatment.

Only once have I really sought treatment due to rowing, and that was because of a boat collision I was in last year, when another boat crashed headlong into my boat (both at race speeds), when the other boat’s par when straight into my back. Thankfully that’s been the only time I’ve really needed help!

In July 2018 the ESO entered its first ever crew in the KM Charity Dragon Boat Race; made up of students, staff and faculty, what the crew lacked in experience was clearly overcome by enthusiasm as they finished the day in 2nd place. The ESO also had volunteers dry side, providing over 100 massages free of charge.  The team were raising money for the Student Welfare Fund – if you’d like to contribute please visit www.justgiving.com/crowdfunding/esodragonboat or call the Clinic on 01622 685989 to donate.