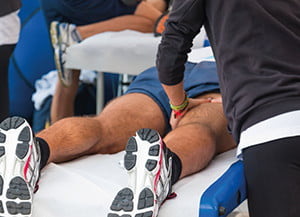 With Maidstone and London marathon events coming up, we asked Peter Horobin, an ESO Clinic tutor and sports specialist, about common injuries he sees at this time of year

As runners are building up the miles the number of patients presenting with ‘runners knee’s’, ‘IT-Band’ problems and achilles tendon issues goes up. ‘Shin splints’ are probably the next most common condition after that.

Why do runners get injured?

That’s a tough question and truthfully it’s a difficult question to answer as there are so many factors that can cause injury or increase a runner’s susceptibility to a pain state. It’s not as simple as saying ‘x’ causes injury.

The majority of running injuries occur due to a combination of factors but often there is some form of training error – such as an unaccustomed increase in running load. Whilst trying to work out why a patient became injured, I like to keep three questions in the back of my mind:

1) How much load are they subjecting themselves to? i.e. how often do they run and what is their training schedule like? Has there been an obvious training error? Might their technique be contributing to excessive load of that body part or might there be other external factors such as a change in running surface or footwear which has increased the demand on the tissue?

2) How capable are they of taking that load? i.e. how strong and robust are the tissues and can they withstand the current amount of training?

3) How capable are they of recovering from that running load? i.e. do they have sufficient rest days scheduled into their weekly plan? Might there be other factors that are influencing their recovery such as excessive stress and poor sleep which might have increased their susceptibility to a pain state and impaired recovery?

What I love about this job is how challenging it can be to hunt down the cause of a problem but it’s particularly satisfying
when you are able to help someone get to the finish line.

If you had to give one bit of advice to a runner, what would it be?

Don’t skip legs day in the gym! From my experience, many runners avoid the weight room in favour of putting in more and more kilometres. Often runners (and even coaches) don’t appreciate how beneficial strength and conditioning exercises are – not only for reducing the risk of getting injured but also for improving performance. So how often should a runner strength train? Well the best evidence we currently have, based on a 2017 systematic review, suggests that 2-3 gym sessions per week consisting of a mixture of heavy slow resistance exercises as well as power ones and plyometric exercises (such as jumping exercises). If you are new to strength training, then there are some good resources online but if possible it’s best to speak to a strength and conditioning coach or a good personal trainer with knowledge of running conditioning. If you are injured though you may need some tailored management before you go down that road.

After graduating from the ESO, Sports Clinic tutor Peter Horobin went on to complete an MSc in Sports Medicine at University College London (UCL) alongside his part-time clinical work. In 2017, Peter was part of the medical team at the World Para Athletics Championships and, in 2018, was appointed Lead Osteopath at the IAAF World Indoor Championships; he has since qualified as a UK Athletics running coach. Peter has enjoyed working in a variety of sporting arenas, including two summers at Guards Polo Club, at various rugby and netball tournaments and as pitch-side cover for small time rugby and football clubs on a cold Sunday morning in the rain. This year Peter is building his own clinic, due to open in the summer, as well as teaching at the ESO.