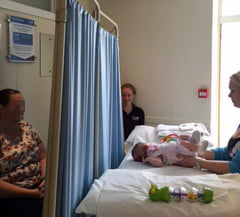 Our research team, under the direction of Dr Anne Jakel, have been studying the blinding process in manual therapy clinical trials.  In a study held at Tonbridge Road, 30 babies aged under 4 months and assessed to be excessively crying, were recruited as trial participants, half of them were osteopathically treated, and half of them did not receive any treatment.  The aim was to test the acceptability and feasibility of using a mobile folding screen during a trial which separated the mother from her baby and the osteopath; anecdotal evidence had suggested mothers would be anxious if a screen was placed between them and the practitioner/infant during the entire treatment session, which could lead to a high drop-out rate or low levels of enrolment.  The blinding potential of the study procedure was also assessed. Since parents were still able to hear their child behind the mobile folding screen, it was proposed that blinding may be difficult or impossible to achieve.

Results showed mothers were happy with the screen being in place and mothers generally did not recognise whether babies had received treatment or not.  However, results were based on only one session; drop-out rates could potentially be a factor within a full trial, should adverse events or no perceived treatment effects be experienced.

The team is now looking at the feasibility of recruiting a larger group of babies to look at the efficacy of osteopathic treatment itself and will be putting together a protocol for ESO and NHS ethics approval in 2017.  Alongside the Tonbridge Road trial, Dr Jakel has undertaken a systematic review to identify and critically evaluate key aspects of the blinding process in clinical trials of manual therapy; results will help inform the design of the team’s new protocol.

Our thanks go to ESO graduates, Louise Bolton and Hannah Kasiri-Martino, who provided osteopathic treatments and acted as research assistants during the trial, as well as Claudia Knox, Head of Clinical services who also was able to provide osteopathic treatment as part of the study.  These studies are being supported through sponsorship from the Sutherland Cranial College of Osteopathy and Sutherland Society.

ESO graduate Samantha Nottage was recently invited to attend the Day of Science organised by the Osteopathie Schule Deutschland (OSD)   in Berlin to present her study ‘Is there a correlation between objective and subjective pain measurements and gamma oscillation frequencies’.  Samantha did a fantastic job and received great feedback from attendees.  The ESO was also represented at the conference by our Head of Research Department, Dr Anne Jakel, who presented the findings of her systematic review ‘Blinding in clinical trials is much more than just administering a sham/placebo: an evaluation of the quality of the blinding process and the viability of sham/placebo comparators – an example systematic review of clinical efficacy trials of manual therapy’.  Abstracts have now been submitted for the ICAOR Conference taking place in Milan in April 2017 – you can keep up-to-date on progress through the ESO’s social media channels.

Leading the way in osteopathic thinking