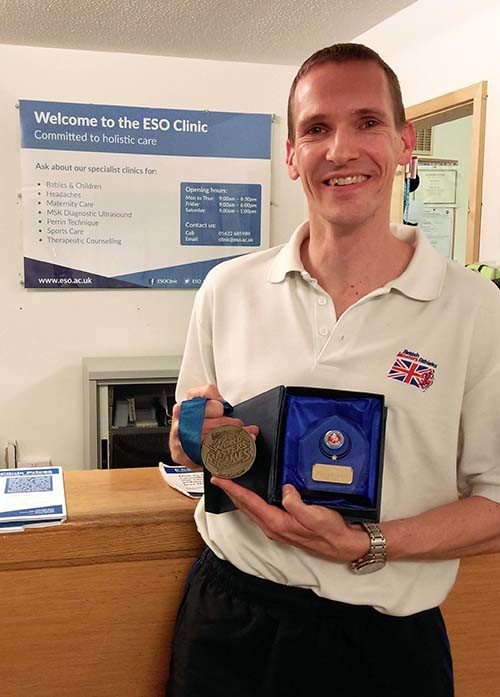 ESO Clinic patient Peter Davey has been winning track and field titles since becoming a Masters level athlete at the age of 35. In December 2017 he was named Kent Senior Male Athlete of the Year in recognition of his fantastic achievements.  We caught up with Peter after his recent ESO Clinic appointment.

“It was such an honour to receive the Award and totally unexpected – to be recognised at the age of 43 alongside previous award recipients like Adam Gemili was amazing and I still can’t quite believe it’s happened.

At the start of 2017 it really didn’t look like it was going to be my year. I was totally focused on preparing for the World Masters Games, due to take place in Auckland, New Zealand in April; it’s the absolute highlight of my programme and with 28 sports represented it’s a fantastic event on par with the Olympics.  Things were going well and I was in great shape until February when a hamstring tear threatened to put an end to my hopes.  I was told by one of the ESO Clinic tutors that it could take up to 4 months for the injury to heal, too late for the games, which were only 10 weeks away.  I’d been having treatments with my student practitioner, Monica, for a while so she knew how much competing meant to me – we were both determined to do what we could to get to me fit in time.  I visited the Clinic regularly for treatment and was given a range of exercises to take away, which I followed to the absolute letter!

By the time of the competition, my hamstring was feeling well enough to chance making the trip to New Zealand, even though I’d not been able to do any serious training. My main event is usually the sprint but I decided against running the 100m on this occasion – my hamstring injury surfaced during a 60m hurdles race and I wasn’t prepared to risk such an explosive event on the first day of competition; although I still couldn’t resist running the 400m and then the 110m hurdles, where I won silver.  My gold medal triple jump turned out to be my best distance since 2010 – I’d only competed at this event indoors in the past couple of years so it was a fantastic and unexpected result, especially in view of the injury I’d sustained earlier on in the year.”

We asked Peter why he chose the ESO Clinic for treatment.

“I first visited the Clinic in about 2011 and over the years the treatments have, I feel, really helped my body recover from injury. I remember one time visiting with what I thought was an achilles problem – after a few sessions the treatment and exercises didn’t seem to be having an effect so I was referred to the ESO’s ultrasound clinic for further investigation. As it turned out there was nothing wrong with the tendon itself – it was purely the exit point for my pain. By focusing treatment on my back and hips the problem was resolved.

I think what I really enjoy about being a teaching clinic patient is the communication; the tutors challenge students to think outside the box and consider any connections that can be made with the symptoms you’re experiencing. And you get to listen and join in with the conversation so you can explain exactly what you’re feeling and when.  I also enjoy being part of the student’s learning – having a tutor apply a technique first of all means I can experience a treatment and then tell the student it’s ok to push a big deeper if they’re being overly cautious.”

And for the future.

“Currently I’m having treatment for swelling in my left knee – I’m competing in Madrid in March so hopefully Monica can help sort me out in time for that!”

We are proud to support Kent’s leading athletes by offering discounted treatments for members of the Kent Sports FANS scheme.  You can find more information about the scheme at https://www.kentsport.org/get-active/sport-performance/fans-scheme/.  To find out how the ESO Clinic can support your club or organisation call 01622 685989 or click to contact us